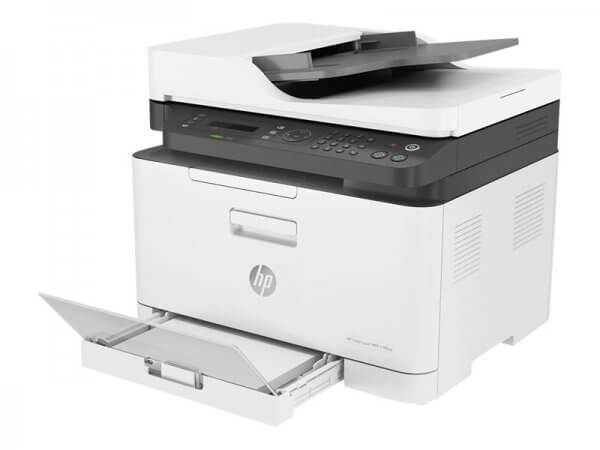 The HP Color Laser MFP179fnw is a relatively entry-level multifunction laser printer designed for home-based and micro-office use. HP labels it as the world’s smallest in its class, and the printer’s compact size does make it a good fit for small-spaced offices. Measuring 13.6 by 16 by 14.3 inches and weighing only 31.1 pounds, the MFP179fnw is leaner by a few inches in all directions, and at least 10 pounds lighter, than the competitors in the market. The 179fnw comes with a 40-page manual-duplexing automatic document feeder or ADF for copying, scanning, and faxing multipage documents.

Manual-duplexing means that the MFP179fnw can’t scan two-sided documents without you having to turn the stack of originals over to capture the other sides. Certain tasks such as making copies, faxing and tweaking the configuration and security settings are executed from the MFP179fnw’s control panel, which is somewhat of an old-school collection of numerous buttons, status LEDs and a number pad, anchored by a two-line monochrome readout-style LCD.

Productivity functions like making copies or sending faxes are set up and executed from their own set of buttons and keys, making them reasonably straightforward and simple. Tasks like making networks and other configuration changes, generating usage reports and setting security options often require navigating multiple layers of drill-down menus on the LCD through four arrow keys and an accompanying OK button.

Granted the users have navigated these types of control panels for several years, but that does not make them as easy to use as this century’s color graphics touchscreens, which come on several of the MFP179fnw’s entry-level competitors as it has a comfortably spacious 5-inch display. Like most printers, the MFP179fnw supplements the control panel with easier access to its monitoring, configuration, report generating, printing features and viewing through a built-in web server.

HP rates the MFP179fnw’s maximum monthly duty cycle at 20,000 pages, with a meager recommended monthly print volume of 100 to 500 pages. The MFP179fnw’s connectivity interfaces are Ethernet, connection to a single PC with USB 2.0, dual-band WiFi and WiFi direct. WiFi direct is a peer-to-peer network protocol that allows you to connect your tablet or smartphone directly to the printer without either them or it being connected to a local network. You also get additional functionality through HP’s Smart App.

In addition to providing a similar interface across all platforms, the HP Smart App provides enhanced mobile support with features like scanning to the printer with your smartphone and setting up workflow profiles for repetitive tasks such as scanning to the cloud and other destinations. Other mobile features include Google Cloud Print, Mopria, and Apple AirPrint.

One of the latest trends of consumer-grade and small-business printers and AIOs these days is voice activation or what HP calls HP Voice-Activated Printing, with built-in support for Google Assistant, Amazon Alexa, and Microsoft Cortana. Adding support for other voice or Smart Home services, including Samsung’s Bixby or Apple’s Siri and any other service that supports IFTTT scripting, is straightforward.

The security features on the MFP179fnw consists mainly of the ability to password protect the embedded Web server and to disable the network ports to block unwanted traffic. And you can filter IP and MAC addresses. But missing are features like Secure Print for protecting documents with PINs and Department IDs for restricting access to specific functions and to the printer itself through usernames and passwords.

Adding to the standard printer and scanner drivers of the MFP179fnw, HP includes its HP MFP Scan, HP LJ Network PC-Fax. It also has an optical character recognition utility for converting numerous scanned images of text to editable text.

What To Look For In A Reliable Copier Dealer

Key Tips for Choosing the Right Copiers and Printers

Factors To Consider in Leasing A Copier